Forum for individual data sets: Findings related to data sets can be reported in detail.

Basic information on the data set[]

In 1990 a comprehensive data set on dispersion behind rectangular buildings was assembled in the US EPA wind tunnel, through efforts led by R. Thompson. The data set systematically describes dispersion for a variety of building shapes, stack heights and stack locations. These data were originally used to estimate so-called Building Amplification Factor. However, the potential of the data set extends much beyond this application.

The experimental database of Thompson includes measurements of ground-level centreline concentration distributions for several different combinations of building shapes, stack heights, and stack location relative to the building. The data set includes around 250 scenarios, where the following parameters vary:

Not all combinations of the parameters were considered, but there are altogether around 250 scenarios. The wind was always perpendicular to the building face.

Essence of experiences with the data set[]

Thompson's data set is very comprehensive, and it deserves to be used much more than it has been in the past.

Availability of the data set and access to validation studies[] 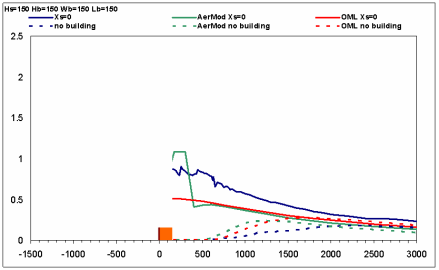 This page is set up by Helge Rørdam Olesen of the National Environmental Research Institute (NERI) in Denmark. Our group has made a study where we used the data to study model performance. We received the data from Steve Perry of the US EPA. The data were made available to us in the form of a large number of ASCII files and a data report by Thompson (1991).

We have rearranged the data sets into a few Excel workbooks with embedded graphs and macros, so the user can vary the stack height or the stack location (using arrow keys), and inspect the resulting changes in concentrations according to both measurements and models. The figure on top is a chart from one of these workbooks.

The Excel workbooks and a lot of other material is available on the web. A page at NERI's web server provides an entry to all of it. A Power Point show provides an easy introduction. Go through the entry page at NERI or use the Direct link to the PowerPoint show.

Community content is available under CC-BY-SA unless otherwise noted.
Advertisement